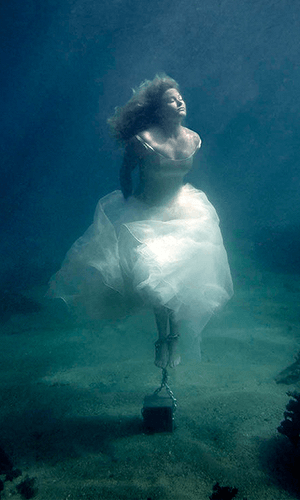 How not to be a mermaid.
Image

When gangsters are punishing someone for crossing them, they often have the victim tied up to a chair with his feet in a barrel, into which they pour quick-drying concrete. Once the concrete is dry, the victim is then dropped into a body of water, simultaneously killing the target and disposing of the body in a supposedly untraceable manner.

Depending on the exact methods used, overlap with some form of Death Trap can occur.

This is largely a Discredited Trope, as few gangland murders are actually performed in this manner. Most are simple bullet/tire iron to the head affairs that generally lack the torture (or opportunity to escape or be rescued Just in Time, if you're a main character) that fiction demands. What is more common, though, is for gangsters to kill someone in a more prosaic way, then weigh the body down and toss it over, making this a way of Disposing of a Body. It may also be related to a similar method of execution supposedly once used by the Freemasons against oath-breakers.note "Never to reveal our secrets under no less a penalty than my throat be cut across, my tongue be torn out by its root, and that I be buried in sand a cable's length from shore.”

See also Constructive Body Disposal, for when the victim is left (alive or dead) at the bottom of a construction site while the basement is being poured.

Upon being captured by a Japanese destroyer crew and refusing to cooperate with his Japanese captors, Gaido is tossed into the sea, tied to an anchor, and left to drown to death.

Alternative Title(s): Sleeping With The Fishes

Upon being captured by a Japanese destroyer crew and refusing to cooperate with his Japanese captors, Gaido is tossed into the sea, tied to an anchor, and left to drown to death.