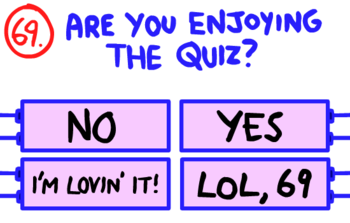 The first two answers are boring, the third is a reference... Pick the one that is unrelated to the question.
"That's the sex number!"
— Griffin McElroy
Advertisement:

The number 69 is slang for a particular sex act (specifically, two participants performing oral sex on each other at the same time), which is why it's often used for jokes - it certainly doesn't help that the modern/Arabic numerals used for the number themselves forms a very self-demonstrating symbol that is amusingly accurate to the positions of both partners. It's also a good source of Demographically Inappropriate Humor since most children won't get it. If the number is mentioned by a character, the other character is likely to react with Heh Heh, You Said "X".

that numbered the various 'positions' listed, number 69, of course, being the Congress of the Crow. As knowledge of this factoid become more well-known, wags soon noticed that the number used was amusingly self-demonstrating, and thus the jokes about it self-perpetuated.

Compare with 420, Blaze It, Pun With Pi, and more generally with Inherently Funny Words.

When Bob asks Linda if they paid the gas bill, she said they did because she remembered the number the check ended in and it made them high-five.

When Bob asks Linda if they paid the gas bill, she said they did because she remembered the number the check ended in and it made them high-five.