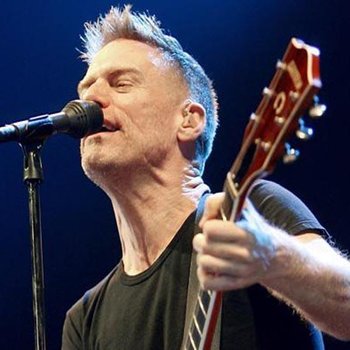 "I've seen it all from the bottom to the top!
Everywhere I go—the kids wanna rock!"
Advertisement:

One of Canada's most successful musicians, Bryan Guy Adams OC (born 5 November 1959) entered the music industry as a songwriter in the late 1970s before achieving solo fame in The '80s. Initially marketed as a "Canadian Springsteen", Adams developed his own distinctive melodic rock beginning with his second album, You Want It, You Got It.

In 1984, Adams became a global superstar with the release of his most successful album, Reckless, which produced a number of hit singles, including the anthemic "Summer of '69" and the Power Ballad "Heaven".

In 1991, Adams teamed up with Robert John "Mutt" Lange to record the album Waking Up The Neighbours. During these sessions they wrote a new ballad for the Robin Hood: Prince of Thieves soundtrack. Originally intended to be given to another artist, Adams released "(Everything I Do) I Do It For You" himself, and it subsequently became ludicrously successful.

While his success has declined in America, Adams is still very popular in Europe and remains one of the most influential and best-selling Canadian artists of all time. Adams is also a very accomplished professional photographer.

Not to be confused with Ryan Adams, nor with Brian Adams, aka Crush.