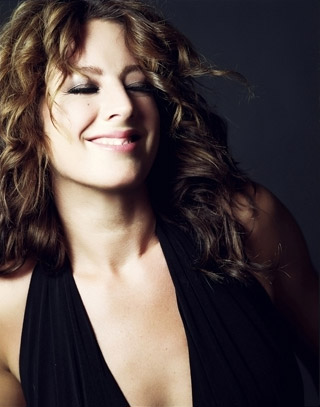 Hi, I'm Sarah McLachlan. Will YOU be an angel for a helpless animal?
Advertisement:

Sarah Ann McLachlan OC (born January 28, 1968) is a Canadian singer-songwriter and multi-instrumentalist. She specializes in emotional music that is a mixture of baroque pop, folk-rock, and adult contemporary. Stevie Nicks has credited her among female artists who embody the spirit of "elegant old rock and roll"note perhaps thinking of artists like Rosie Mendez-Hamlin in 1961's "Angel Baby

". She is also known for her soothing mezzo-soprano voice. In addition to her personal artistic efforts, she founded the Lilith Fair tour, which showcased female musicians in the late 1990s and in 2010. It was originally created in backlash of radio stations not wanting to plays songs by female artists back-to-back.

She is mainly popular due to her Signature Song "Angel" (made for The Smashing Pumpkins' touring keyboardist Jonathan Melvoin, who died of a heroin overdose), iconic for its memetic use for Tear Jerker situations, most notably a commercial for the ASPCA

"In the tropes of the angel":