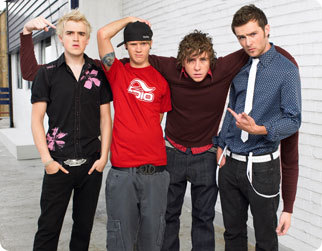 L-R: Tom, Dougie, Danny, Harry
"Everyone asked me who the hell is she?
That weirdo with five colours in her hair."
— "5 Colours in Her Hair"
Advertisement:

McFly are a British Pop-Rock band who were formed in 2003. While being rather obscure in most overseas countries (In America, non-fans will probably only know them from the movie Just My Luck, if they've even heard of them at all), they're a mainstream success in the UK, with 15 top-ten singles, 7 number ones and a World Record for youngest band ever to have their debut album chart at number 1 (The record was previously held by The Beatles).

In 2006 they had supporting roles in Just My Luck, alongside Lindsay Lohan. (It was there that Harry and Lindsay would have a supposed fling, which inspired their song 'Please Please')

McFly have released 6 Studio Albums (7 if you count "Just My Luck" in the US), 3 Greatest Hits Albums (Two regular, one exclusively B-sides sold only in certain Woolworths stores), 3 live DVDs and one movie (Not counting Just My Luck). They recently released The Lost Songs comprised of songs they recorded in 2011-2013, confirmed by Dougie in a podcast in January 2019. They also teamed up with their friends James Bourne and Matt Willis of Busted to form McBusted, then released an album in 2014.

Yes, they are indeed named after the family from Back to the Future.

The members of McFly are: