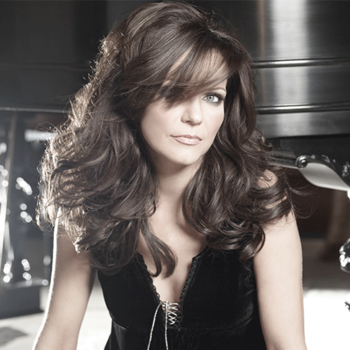 A country hit-maker of The '90s and early-mid 2000s, known for her big soprano voice and constant themes of female empowerment.

Born Martina Schiff in Medicine Lodge, Kansas, McBride got her start in a family band, before moving to Nashville in 1991. She sold merchandise for Garth Brooks before signing with RCA Records in 1992. Although none of the singles off her first album made much of a dent, she got her first Top 5 hit in 1993 with "My Baby Loves Me", off her second album, The Way That I Am. The album also included one of her most famous songs, "Independence Day", a controversial song about domestic abuse as seen from the victim's daughter's standpoint.

1995's Wild Angels brought her to the top of the charts for the first time with its title track, but other singles from it were not as succesful. Starting with 1997's Emotion, McBride began moving to a more pop-influenced sound, which netted her first crossovers in "Valentine" (featuring pop pianist Jim Brickman) and especially the #1 hit "A Broken Wing". This album also certified triple-platinum in the U.S., and it set the tone for her material to come: slick production, themes of empowerment and "big" issues (many of her songs deal with abuse, illness, and the like), and of course, full-force soprano belting.

McBride's hot streak continued through 2004, including additional #1 hits in "Wrong Again", "I Love You" (her longest-lasting, at six weeks), and "Blessed". She also topped the Adult Contemporary charts in 2004 with "This One's for the Girls". After a 2005 detour to traditional-country covers on 2005's Timeless, she continued scoring lesser degrees of hits into 2010, when the underperformance of her Shine album led to her leaving RCA in favor of Republic Nashville. Her only Republic album, Eleven, fared little better, so she moved to Kobalt to release another covers album, Everlasting, in 2014.