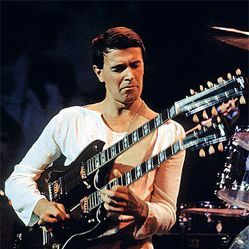 "A person would be a moron not to appreciate McLaughlin's technique. The guy has certainly found out how to operate a guitar as if it were a machine gun. But I'm not always enthusiastic about the lines I hear or the ways in which they're used. I don't think you can fault him, though, for the amount of time and effort it must have taken to play an instrument that fast. I think anybody who can play that fast is just wonderful. And I'm sure 90% of teenage America would agree, since the whole trend in the business has been 'faster is better.'"
—Frank Zappa, interview in "Guitar Player" (1977).
Advertisement:

He played together with many blues bands in the 1960s, including Georgie Fame and the Blue Flames, The Graham Bond Organisation and Brian Auger. In 1969 he made his debut. He worked close together with many legendary artists, such as Miles Davis (on Bitches Brew, In a Silent Way,...), Tony Williams, Jimi Hendrix, The Rolling Stones, Carlos Santana, Gil Evans, Jaco Pastorius, L. Shankar,... But he is best remembered as the frontman of the Mahavishnu Orchestra, a legendary Psychedelic Rock and Jazz Fusion band who were active throughout the 1970s.

Well into his seventies now McLaughlin is still going strong, having worked almost half a century in the business. He is well respected among fans, critics and fellow colleagues as one of the finest and most underrated guitarists in his field.

With the Tony Williams Lifetime:

With the Mahavishnu Orchestra:

With the Guitar Trio:

With the 4th Dimension

With the Five Peace Band

McLaughlin appears as a sideman often as well, including these albums with their own tropes pages: