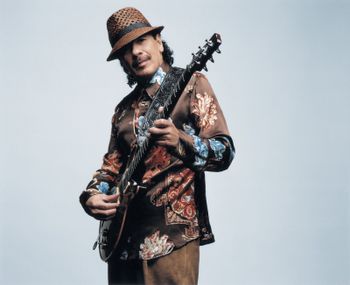 "My job in this life is to give people spiritual ecstasy through music. In my concerts people cry, laugh, dance. If they climaxed spiritually, I did my job. I did it decently and honestly."
Advertisement:

Carlos Humberto Santana Barragán (born July 20, 1947) is a Mexican American rock guitarist. Santana became famous in the late 1960s and early 1970s with his band, Santana, which pioneered rock, salsa and jazz fusion. The band's sound featured his melodic, blues-based guitar lines set against Latin and African rhythms featuring percussion instruments such as timbales and congas not generally heard in rock music. Santana continued to work in these forms over the following decades. He experienced a resurgence of popularity and critical acclaim in the late 1990s.

Rolling Stone recognizes Santana as the twentieth greatest guitarist of all time on their list of 100 Greatest Guitarists of All Time. He has won 10 Grammy Awards and 3 Latin Grammy Awards.

His nephew, Víctor Hugo Aguilar, is a voice actor and ADR director.