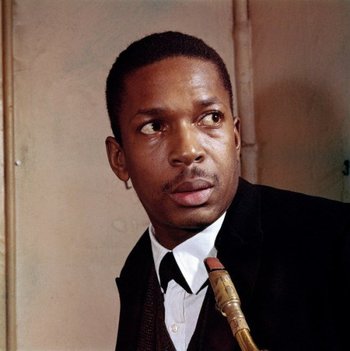 The Father, Trane
John William Coltrane (September 23, 1926 – July 17, 1967) was a legendary American saxophonist. His bold, aggressive saxophone style was hugely influential in the avant-garde jazz scene of the early '60s and late in the free jazz scene of the mid-to-late 1960s. Unfortunately, he died at a very young age in 1967, after a series of extremely experimental albums. His legacy includes being worshiped as a saint, and even by some as a deity, but more prosaically, he's still one of the most influential musicians of his generation in that it took at least two generations before sax players didn't automatically try to emulate him. His influence isn't limited to just sax players, either: a large number of rock guitarists such as Duane Allman, Frank Zappa, and Jimi Hendrix have cited his profound influence over their work, and his influence extends even beyond that, to metal bands such as Deathspell Omega, electronic musicians such as Flying Lotus (perhaps not coincidentally, Coltrane's grand-nephew), and hip-hop artists such as Kendrick Lamar. His widow, pianist and harpist Alice Coltrane (née McLeod, later known as Turiyasangitananda or Turiya Alice Coltrane), later became a respected bandleader in her own right, and many of her albums such as Journey in Satchidananda and World Galaxy are regarded as Spiritual Successors to her late husband's work.

Albums by Coltrane with their own page: