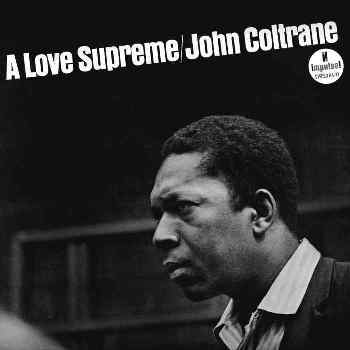 A Love Supreme is a studio album by John Coltrane, recorded on December 9, 1964, and released in January 1965 on Impulse! Records. It's some sort of a spiritual Concept Album, divided into a four part suite: "Acknowledgement", "Resolution", "Pursuance", and "Psalm". Compared to his previous albums, it also sold better; it is probably the best-selling free jazz (or even avant-garde jazz) album of all time. The album manuscript is one of the National Museum of American History's "Treasures of American History", and part of the collection of the Smithsonian Institution.

The 2002 CD version adds a bonus CD that opens with a live performance of the album in its entirety at the Festival Mondial du Jazz Antibes in Juan-les-Pins, France, on July 26, 1965. Until 2008, this was the only known live recording of the song suite in its entirety; there's a running debate among fans as to whether it's even better than the studio record. (The other recording, performed on October 2, 1965, was finally released in 2021 as A Love Supreme: Live in Seattle.) Following this are four outtakes from the studio sessions (of which the latter two were recorded on December 10, 1964; they are specifically take four and take one from the sextet sessions mentioned below):

And then there's a two- or three-disc The Complete Masters version from 2015, which has the following "original mono reference masters" as bonus tracks on disc one after the original album:

And, in the "Super Deluxe Edition" of this release only, a third disc containing the July 26, 1965, live performance listed above.

On the sextet tracks, these four are joined by: