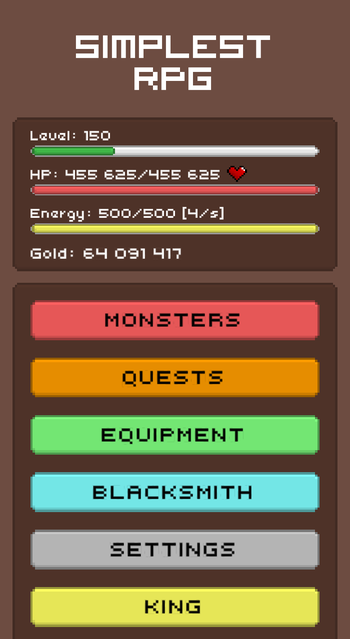 Simplest RPG is a mobile Role-Playing Game by Codejungle released in 2020. In it, you play as an unnamed hero who has to fight monsters to level up and enhance his equipment. You can also go to the ruins to search for items. The game also lets you enhance items, which is often needed for more powerful monsters. The game is simplistic as the title implies, as monsters are not shown so you can use your imagination to come up with what they are and many RPG mechanics only show up in the most basic forms.

Simplest RPG: Online Edition was released in 2021, with more graphics like icons and random characters popping up to show tutorials, but it still leaves what the monsters look like to your imagination. The original version is still supported and receives regular updates, for players who have weaker hardware or just prefer something even more simplistic.

Tropes present in the original: