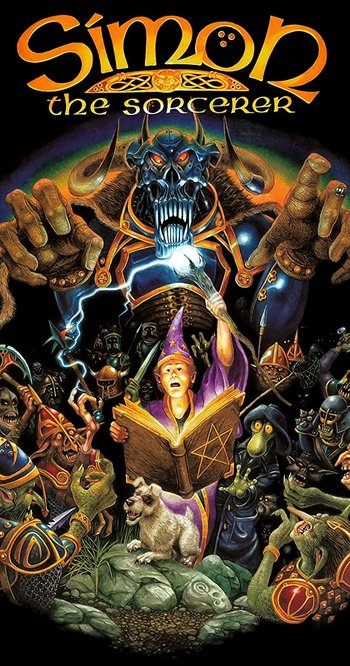 A series of five adventure games, created initially by Adventure Soft and Head First Production, later by the German company Silver Style Entertainment, in the which the protagonist, an obnoxious, narcissistic teenager from our universe, gets sucked into another universe by the good wizard Calypso to fight the evil wizard Sordid.

Basic as the plot may sound, these games include endless charming parodies of various popular books and fairy tales, including Rapunzel, The Lord of the Rings, The Chronicles of Narnia, Jack and the Beanstalk and The Three Billy Goats Gruff. To wit: the latter involves a troll protesting about being tossed from a bridge every day and thus wishing to rework his contract.

The first game was about as well received as the Monkey Island games at the time getting scores in the 90% area. Seven games have been made in total (two games being average pinball and puzzle games), the first two beloved, the subsequent sequels... not so much. An eighth game that would bring the series back to its roots with 2D graphics, a more British sense of humour and hand-drawn imagery was later in development by StoryBeasts. Unfortunately, the developing team broke up and the project was cancelled. In the year 2022 the prequel game Simon the Sorcerer: Origins developed by Smallthing Studios was announced.

The first two games are also available as apps in the Apple Store and can be played on the iPad. Whether it's as fun or practical to play as the PC version is arguable. In 2018, a 25th anniversary edition was released on Steam.

Simon is voiced in the first game by Chris Barrie, known for his roles in Red Dwarf and The Brittas Empire.

Tropes used in the games include: