Number of the Beast 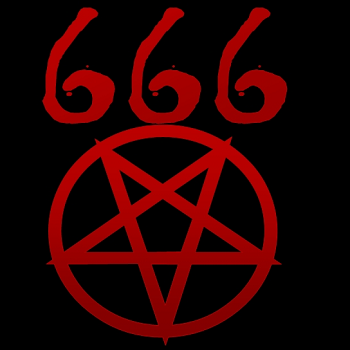 I'm going to Hell, in a handbasket, of my flesh they'll make a feast
I'm gonna be there in that number, that's six, six, six, the number of the beast!
note Pentagram Wallpaper

by lancemcrae666
"But woe to the Earth and Sea, because the Devil has gone down to you! He is filled with fury, because he knows that his time is short...Let the person who has insight calculate the number of the beast, for it is the number of a man. That number is Six hundred sixty six."
— Revelation 12:12, 13:18, The Bible (NIV)
Advertisement:

You know what this is. Six hundred and sixty-six, the Number of the Beast, first mentioned in the Book of Revelation in The Bible, making this Older Than Feudalism. Sometimes used for that extra symbolism everyone loves, but it's usually used because it's a nifty keen way to show that something is eeeevil.

Oddly enough, the Beast of Revelation itself is rarely ever mentioned anymore. (In fact, there were two of them in the Book of Revelation, the Number describing the second.) The Number has totally eclipsed the being it represented.

Sometimes gets truncated to 66 or lengthened to 6666 (or even beyond) if 666 is too high or too low a number, yet still evokes the Numerological Motif. Or if you're dealing with Louis Cypher, 666 may be part of his address or phone number, in the vein of 555. Another common gag is for this to overlap with 6 Is 9, having someone ineptly render the Beast's number as 999.

The actual number, however, is a subject of debate among theologians and historians: many say the number is actually 616, as some of the older Latin copies of Revelation list it as that rather than 666; all the Greek ones list it as 666, and most probably the name it indicated had a different sum according to their numerological schemes in different alphabets. However, 666 is so much better known that if you try to go with 616 instead it will likely fly over the heads of most readers and viewers. Note that either way, it is the value six hundred and sixty-six or six hundred and sixteen, not just three sixes in a row (like June 6th 2006). In fact, back then it would have been written χξϛ/χιϛ (chi - xi - digamma / chi - iota - digamma)note The Greeks used a unique set of symbols for each decimal place. So χξϛ would be (600)(60)(6) and χιϛ would be (600)(10)(6) in Greek and the guy who wrote Revelation would totally not get the stuff about three sixes in a row.

Interestingly enough, another interpretation is 216, as some older translations define this enigmatic number as "6 by 6 by 6", or 63.

The "616" is also the number given to the main Marvel Universe (as opposed to the other alternate realities). Since it was originally established by Alan Moore, it's probably safe to assume this was deliberate.

In Mandarin Chinese, 666 sounds like the phrase that roughly translates as "everything going smoothly", so the number is considered lucky in China, especially for commercial undertakings.Explanation This is a more modern development, however. It began in the era of online gaming, commonly thought to be League of Legends, whereas certain players didn't have enough time to praise a teammate doing extremely good in-game via in-game chat. Therefore, instead of typing 溜 (Liū), which was meant for 'to slip away', in context being 'Smooth move!', they instead typed and spammed 六 (Liù), which means 'six'. Eventually it caught on, with the shortened version being '六六六' or '666', and everyone in China started catching on it, using them to express awe at something.

If you're looking for the Signature Song of Iron Maiden which has the same name, see their Trope page.

Compare with its Asian counterparts, 108 and 4. For the Robert A. Heinlein novel, see The Number of the Beast. Not to be confused with 555, which is about fake phone numbers, though as stated above, sometimes an evil-associated fake number can make them overlap. See also Mark of the Beast, when association with dark powers gives someone a physical marking.