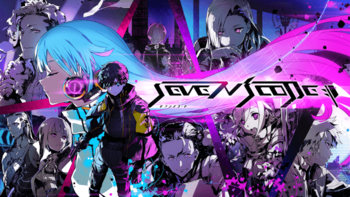 is a Rhythm Game developed by UNLIMITED STUDiO (notable for having Naoki Maeda of Dance Dance Revolution fame as one of its founding members) and published by Applibot, for iOS and Android, as a Spiritual Successor to CROSS×BEATS, which was terminated in 2018. It was released in Japan in October 2019, and later got a global release with an English localization in January 2020; content updates are synchronized across all regions. The final content update was released in Octobet 2020, although the game is still playable.

The game features two distinct play styles, Simple and Chaos. Simple mode features conventional lane-based gameplay, in which notes scroll towards the player in a "hallway" perspective (similar to Guitar Hero and CHUNITHM) and must be hit when they reach the judgement line at the bottom. Chaos mode basically picks up where CROSS×BEATS left off, featuring notes popping up on a two-dimensional plane with two guidelines coming from opposite directions, on which markers slide towards the notes; you hit the note when the markers reach it. Gameplay is mainly focused on one-on-one battles, with both players using special character skills to inflict Interface Screws on the opponent while gaining Score Multipliers for themselves.

Needs Wiki Magic Love, particularly in regards to the game's story and lore.

TV.TROPES.WIKI
A community-edited wiki dedicated to cataloguing tropes, or conventions and idioms, in fiction media. For some reason, someone started a page on SEVEN's CODE on TV Tropes Wiki.