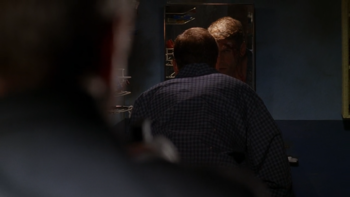 "Whosoever shedeth man's blood by man shall his blood be shed."
— Genesis 9:6
Written by Chip Johannessen
Directed by Rob Bowman
Scully: Well, then, if Reverend Orison meant to kill Donnie Pfaster then why is he still alive?
Mulder: I don't know. Maybe he unleashed something that he couldn't control. Maybe he thought he was opening the door of perception but then unwittingly he... opened the gates of Hell.
Advertisement:

Donnie Pfaster is broken out of prison by a vigilante prison chaplain, Reverend Orison (Scott Wilson), who intends to give Pfaster his own form of justice. However, Orison has bitten off more than he can chew, and Pfaster deals with him and then goes after Scully.

Mulder: The Bible allows for vengeance.
Scully: But the law doesn't.