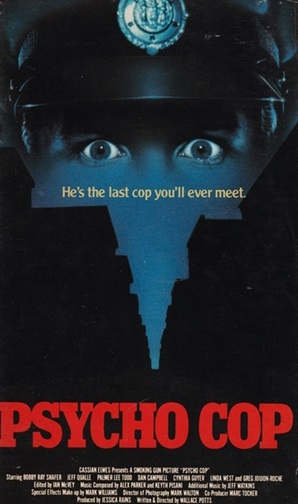 He always gets his man... and everyone else.
— Tagline
Advertisement:

Psycho Cop (1989) and its sequel Psycho Cop Returns (1993) are two slasher movies which follow the exploits of psychopathic police impersonator Joe Vickers (Robert R. Shafer), who is on a mission from Satan to kill everyone he perceives as criminals and make bad puns out of everything while he's at it. Curiously, these movies hit the cinemas right after the first Maniac Cop installment.

In this film, three young couples decide to have good time on a luxury cabin which resides in middle of the woods. They are followed by Vickers, who starts killing them one by one.