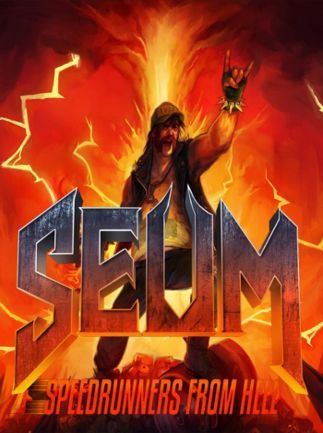 Hell yeah!
"Does this portal lead to my beer?"
— Marty
Advertisement:

SEUM: Speedrunners From Hell is a first-person platformer released on Steam in July 2016. The game is all about speedrunning through short levels, using a variety of powerups and projectile fireballs to open gates and run through the game's hellish landscapes.

The game follows the story of Marty, a redneck and beer-chugging Heavy Metal fan enjoying his beer while watching the game. Suddenly, someone slides a vinyl disc under his door. Dumbfounded, Marty puts it on his gramophone and it starts playing demonic backwards speech and Satan himself comes out! He steals Marty's beer and cuts off his arm, but Marty throws the vinyl at Satan which chops his arm off. After he leaves, Marty ties Satan's arm to his stump and follows him into a sewer to Hell on a quest to take back his stolen beer.

A DLC for the game has been released in 2017. The Drunk Side of the Moon contains 33 new stages and 3 new powerups in a space environment.