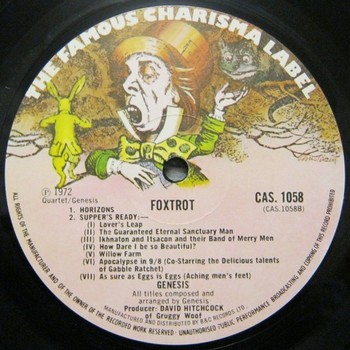 As Peter Gabriel has said, it's "a personal journey which ends up walking through scenes from Revelations in The Bible."

"Supper's Ready" is a seven-part songnote or, arguably, eight-part song, as explained under Subdued Section, but there are only seven official movements by the seminal Progressive Rock band Genesis, appearing on their 1972 album Foxtrot. At around 23 minutes long, it takes up almost an entire side of the original vinyl release (apart from a brief, unrelated instrumental entitled "Horizons") and is Genesis' first real Rock Opera (if "The Musical Box" doesn't count, anyway). Alongside The Lamb Lies Down on Broadway, it's one of the major contributors to Genesis' lasting reputation and influence on progressive rock, and it's exactly how a surrealist prog-rock opera should be done.

Note that while this is the only 20-plus-minute suite Genesis released, it's not the only one they wrote. From Selling England by the Pound, "Dancing with the Moonlit Knight", "The Cinema Show", and "Aisle of Plenty" were originally conceived as a single composition, but the band split "Dancing" and "The Cinema Show" up after deciding it was too similar to "Supper's Ready"; the songs ultimately bookended the album. Also, from Duke, "Behind the Lines", "Duchess", "Guide Vocal", "Turn It On Again", "Duke's Travels", and "Duke's End" were originally a side-length suite as well, sometimes called "The Story of Albert", but the band split it up for a number of reasons, similarities to "Supper's Ready" being one of them.note The band also believed that it would've left Duke with a weaker B-side (or A-side if they'd used it as the B-Side), and also - correctly, as it turned out - that progressive rock's commercial fortunes were declining, though one can't help wondering whether, if they'd released the suite in its initial configuration, that could have revived them. "The Story of Albert" was still performed in its entirety live during almost every show the band played in 1980, though.

The song is divided into:note Movement lengths are unofficial, based on the lyrics and musical shifts between movements