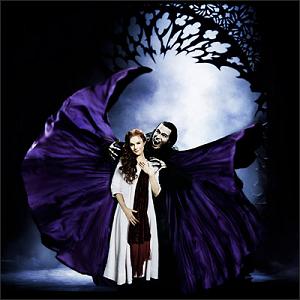 Tanz der Vampire is an Austrian musical with music by Jim Steinman and lyrics by Michael Kunze. It's The Musical of The Fearless Vampire Killers, and has the same general story, but with several alterations. All in all, it's a decidedly more raucous, over-the-top experience than the movie, chock full of Alternative Character Interpretation.

The basic plot features Hunter of Monsters Professor Abronsius and his timid, feeble assistant Alfred arriving in a Transylvanian village straight out of Hammer Horror. Alfred falls in love with the innkeeper's daughter Sarah, and she toys with him a bit before running off to the local castle instead. Of course, said local castle is infested with vampires, lead by Count von Krolock and his Camp Gay son Herbert (who has his own eye on Alfred), and Sarah prepares to become Krolock's new Queen of the Night at a lush vampire ball. Alfred, unaware that she's happier this way, valiantly tries to rescue her (when he's not screaming like a girl). Meanwhile, Sarah's father is turned into a vampire himself, and he goes on to turn Magda, the beautiful and chaste maidservant he's been lusting after for years, into his undead girlfriend.

There was a Broadway version called Dance of the Vampires, but mentioning this is a good way to get hit in the face by fans of the European version. (Indeed, the American producers fired Jim Steinman from the project for protesting their Executive Meddling.) In Europe this show is largely regarded as the exception to the idea that all vampire-themed musicals will fail, which otherwise applies as strongly as it does in America (Frank Wildhorn's Dracula tried to mimic the Tanz formula by having the score rewritten as a rock show and even casting perennial Krolock Thomas Borchert as Dracula. It lasted only a little longer than it did on Broadway).

The Oberhausen cast performed a multilingual version of the finale in 2008, giving hints that there may be Italian and Portuguese productions as well in the future. There have been talks afoot about a production in the UK, but producers are reportedly unwilling to touch it for the two-fold reason of a) the show's English title not being changed to something other than Dance of the Vampires, and b) the show's unfortunate Broadway reputation under said title. Rumors of a new English version being in the works ultimately proved to be unfounded at the moment, but this does not preclude later plans.

Fan-projects are abundant with this musical right now. A LiveJournal user is translating the songs from the show into Spanish (here

is the Spanish version of "Totale Finsternis") and there are a few tracks existing from Dança dos Vampiros, an amateur Portuguese performance put together by a group of fans. There are also a couple clips from a pre-actual-production Hungarian fan album floating about the Internet. Suggestions have been made for various translations or fan recordings, but nothing other than these have yet come out of it.

The original and all other versions except the American and St. Gallen iterations include examples of:

The American production includes examples of: