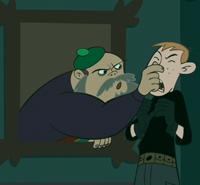 Don't call the portraits creepy.
"Who puts a picture frame on a window?!"
— Candace, Phineas and Ferb
Advertisement:

When you don't have time to cut out the eyes in a painting for a Portrait Painting Peephole, the next best thing to do is strike a pose and imitate a painting or picture so as to spy on your friends.

When you get right down to it, this is a trope that really requires only two dimensions in order to work, as anyone with a functioning brain could probably determine the difference between a highly realistic painting, and someone sitting in a room behind the wall because of depth perception.

See also Nobody Here but Us Statues, Mirror Routine and Wallpaper Camouflage.