All Musicals Are Adaptations 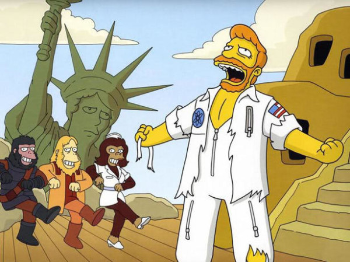 ♪ Oh my god! I was wrong!
It was Earth All Along! ♪
"So start off on the right foot and select a story that is all prepared for you. The translation of that story to musical form is quite complex enough. Within that frame you will find more than adequate challenge to your originality and enough on which to experiment."
— Alan Jay Lerner, Advice to Young Musical Writers
Advertisement:

Many musicals - one could even argue the majority - are adaptations. There are two major reasons for this tendency:

b) Commerciality. Primarily, musical theatre has always been a commercial medium that tries to appeal to as wide an audience as possible. Moreover, as the sheer costs of staging a Broadway or West End musical continue to skyrocket, producers are under increasing pressure to guarantee their shows will be smash hits. Audiences are more likely to come see a musical (or play, or film ...) based on a property with which they are already familiar, so adaptations are a safer bet than original works, though of course they're not sure hits (as proven by the line of unsuccessful musical adaptations of Cyrano de Bergerac stretching back to 1899).

This trope is so common that it is more useful to list exceptions and parodies than straight examples, and it is often said "great musicals are not written, they are re-written". Note, however, that it can be difficult to define what counts as an "adaptation". Whilst many musicals draw their narrative structure directly from the movie, novel, stage play, comic book, short story, ancient Greek myth etc. on which they were based, many other musicals take their inspiration from a variety of unusual sources - a historical figure or event, a painting, a concept - but provide an original narrative. Historically, this is hardly a new phenomenon, as most operas, operettas and ballets are also adaptations. Only here it is not as obvious to lay people thanks to Adaptation Displacement and because many classic operas were adapted from works which were not as well-known in the first place or which have since been entirely forgotten by the general public.

Incidentally, this is why so many musicals are subtitled The Musical!

Stop The Planet of The Apes

Hilariously parodied in this classic bit, where Troy McClure (You may remember him from such Simpsons episodes as "Bart's Friend Falls in Love" and "Radioactive Man"!) stars in a musical about Planet of The apes, featuring breakdancing orang-utans and a whole number about Dr. Zaius.

Stop The Planet of The Apes

Hilariously parodied in this classic bit, where Troy McClure (You may remember him from such Simpsons episodes as "Bart's Friend Falls in Love" and "Radioactive Man"!) stars in a musical about Planet of The apes, featuring breakdancing orang-utans and a whole number about Dr. Zaius.