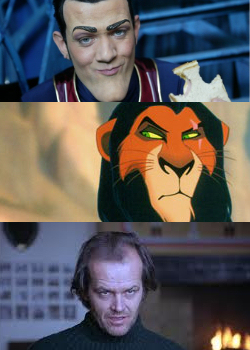 Nothing says "villain" more than a pair of dark, high-arching eyebrows!

It doesn't matter if a villain is smiling, laughing, crying, or frowning, Evil Eyebrows will remain at a permanently high arch on his or her forehead, giving the character a constant expression of menace or disdain.

Evil Eyebrows are usually darker and curve higher than any other character's eyebrows. The level of thickness varies—if the hero has thick eyebrows, the villain usually has razor thin ones to counter this. But if the hero has thin eyebrows, the villain's will usually be thicker than the fuzziest of caterpillars. Either way, they will still have the trademark "evil arch" that every bad guy seems to be born with.

Will sometimes have a scar crossing through one of the eyebrows to emphasize the evil.