Western Animation / The Princess and the Pea 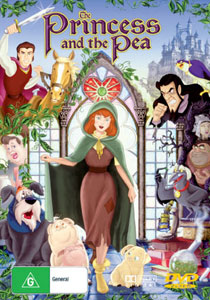 The Princess and the Pea is an obscure 2002 animated film based on the Hans Christian Andersen fairy tale of the same name.

After King Heath's daughter is born, his evil brother, Laird, switches her with his own newborn daughter and sends her away to live with pig farmers as vengeance for not inheriting the crown.

The princess grows up to be a peasant girl named Daria, and after a chance encounter with Prince Rollo, they fall in love. Rollo quickly sets aside his own feelings in favor of marrying a princess for the good of his kingdom, but trouble is stirring when Laird schemes to get his daughter, the wrongful princess Hildegard, to marry Rollo and to get Daria out of the picture for good.

There's also the matter of an impending prophecy that the kingdom will fall to ruin after the rule of the 18th king, and the only way to find the rightful princess to rule it is to have her sleep atop 20 mattresses with a single pea at the bottom and see whether she can detect it without knowing it's there.

There is also a spin-off TV series, as can be seen here, dubbed in Russian

The Princess and the Pea provides examples of the following tropes:

Alternative Title(s): The Princess And The Pea