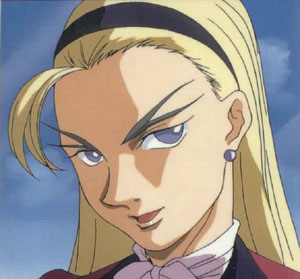 Hmm, maybe you used too much eyeliner.

Need a striking, original character design, but only know how to draw about six faces? Why, give them a pair of Unusual Eyebrows, of course!

Apart from hair, giving a character a pair of not-quite-standard looking eyebrows is an easy way to make them physically stand out without making them more difficult to draw. Best yet, there's an easy selection of potential eyebrow styles to choose from:

Some styles have become so common that they've earned their own tropes:

Make the character's eyebrows odd enough, and you might find fans obsessing over them as much as the Iconic Outfit.

Not related to either Oddly Visible Eyebrows or the Fascinating Eyebrow.