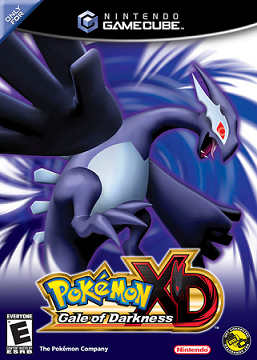 Those letters stand for eXtra-Dimension; it wasn't intentionally made to resemble the Emoticon.
Advertisement:

Pokémon XD: Gale of Darkness is a Spin-Off game in the Pokémon series, developed by Genius Sonority and released for the Nintendo GameCube in 2005. The game is a sequel to Pokémon Colosseum, released on the same system.

5 years after the events of Colosseum, Team Cipher has reemerged with a new mysterious boss and renewed vigor. They bided their time to further perfect their tainting process and managed to create Shadow Lugia, the most powerful Shadow Pokémon of all and allegedly immune to purification. Thankfully, a group of Crazy-Prepared scientists feared for this eventuality and also spent the time and money to create numerous countermeasures, such as a new Snag Machine and a more efficient purification process.

Similar to its predecessor, the gameplay revolves stealing Pokémon from the bad guys in the Double Battle format. Despite the Darker and Edgier look presented by the cover, XD scales things back a few notches by replacing the Anti-Hero main character with a Kid Hero named Michael, and cleaning up Orre so that it's not quite as gritty as before. The plot this time revolves around "XD001": a Lugia transformed by the reborn Cipher crime syndicate into a Shadow Pokémon supposedly immune to purification.

XD: Gale of Darkness added a few new features, such as "Poké Spots", small areas where you could lure and catch wild Pokémon, and a method for mass purifying Shadow Pokémon. In addition, Shadow Pokémon now have a much greater variety of moves than just Shadow Rush and there are more to catch than before.