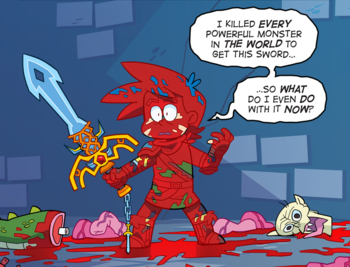 "Well, I do need something to clean my toilet..."
10. Unlocking Crap - I will no longer play through a game nine times on Ultraviolence mode with the declawed kitten character so I can unlock the infinite-ammo laser chain gun. All I've proven to anyone is that I clearly don't need the thing.
— 1up.com's Top 10 Videogame Resolutions

The Bragging Rights Reward is a powerful gameplay reward you receive after you do something that proves you're good enough to not need it.

Such a reward is often found by defeating the most powerful monster, beating the hardest level, clearing the hardest difficulty, or achieving 100% Completion. It's only for bragging rights because you've already conquered the toughest of obstacles, or have already exhausted all of the game's content. Quite simply, whatever you get doesn't help you that much anymore. Since you can already triumph over anything the game could throw at you before, anything more you receive after completing the challenge is simply overkill.note Then again, There Is No Kill Like Overkill, right?

The classic example is any reward you receive when you defeat the hidden, optional boss that's by far the toughest enemy in the game. This is also often the fate of the Infinity +1 Sword (and making weaker weapons Infinity Minus One Swords). After all, you just beat the hardest enemy in the game; you clearly don't need to be any stronger. A New Game+ is an attempt at getting around this, by letting you carry your new stuff into a new game where it'd actually be useful. Of course, none of this is meant to imply that the Bragging Rights Reward is necessarily a bad thing, as to many dedicated gamers, the satisfaction of accomplishment is reward enough.

In summary, the Bragging Rights Reward would be useful if you weren't already so skilled and powerful that you didn't need it anymore. See also: Awesome, but Impractical. If the reward isn't even nominally useful and presented only as proof of accomplishment, it's a Cosmetic Award.

As an odd side effect, it will often work out that the more difficult an optional boss is, the less useful its reward will be, and vice versa. It may turn out to be Purposely Overpowered, or it may be Junk Rare.