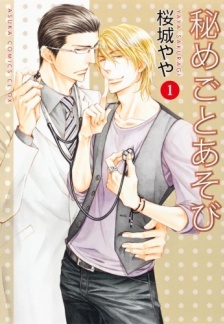 Divorced single father Tanihara Shuji owns a candy shop. A well-dressed customer walks in to buy some cheap kids' toys, and it turns out that he is the new local pediatrician, Dr. Saji Takafumi. When Tanihara's water heater fails, Dr. Saji offers to lend him his shower, but warns him that he is gay, and so if he is prejudiced he should decline the offer. Tanihara is surprised by how easily Dr. Saji came out of the closet to a stranger, and decides to take him up on his offer.

Once at Dr. Saji's house, Tanihara finishes his bath and exits the bathroom. Dr. Saji requests that he use the hair dryer, as he finds wet hair arousing. Tanihara finds himself excited at this news, and asks Dr. Saji to seduce him.

A manga of the yaoi genre by Yaya Sakuragi, published in 2012. Also known as Himegoto Asobi.

Hide And Seek contains examples of: