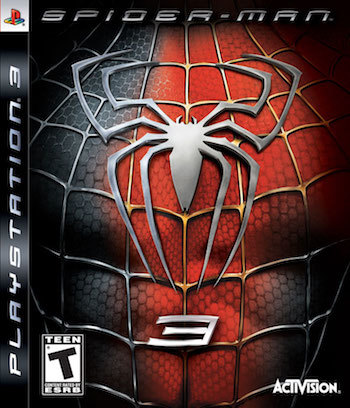 Just in time for the release of the 2007 film, a video game adaptation of Spider-Man 3 came out, being developed once again by Treyarch Studios and published by Activision. While the game follows the most basic elements of the film's plot, it eliminates virtually all of its sub-plots in favor of some different sub-plots that feature several antagonists from the comics as well as some all-new ones.

The villain line-up varies across game platforms. While all platforms feature the main film villains as well as the Lizard, Kraven the Hunter and Luke Carlyle (who here is portrayed as a Mad Bomber), only the PS3/360/PC versions of the game include Scorpion, Rhino, and the Kingpin; and likewise, only the PS2/Wii/PSP versions include Shriek and Morbius.

In addition to the supervillains, a few of the game's sub-plots also revolve around several gangs in the city; them being the punk-filled Apocalypse gang, the ninja clan-inspired Dragon Tail, the PS2/Wii exclusive Wasteland gang, and lastly, for the PS3/360/PC versions, Arsenic Candy, an all-female gang dressed as gothic lolitas (...seriously...).

Tropes shown in the Spider-Man 3 video game include: