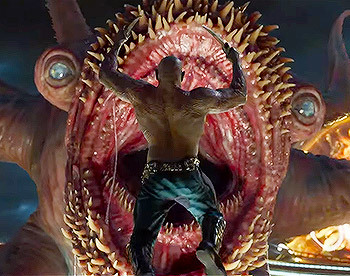 Drax, the (Bowel) Destroyer.
"You're nothing but a smear on the Sports page to me, you slimy, gut-sucking, intestinal parasite! Eat me! EAT ME!"
— Agent K, Men in Black
Advertisement:

This is a strategy by which a character intentionally allows their enemy to consume them so that they can attack it from the inside.

There are two basic variations on this. The first type is typically used against Extreme Omnivore monsters which have no compunction against just eating the hero. The hero allows the monster to swallow him whole so that he can blast its unprotected insides. The second type is used against villains in The Assimilator mold. The hero lets the villain assimilate him or absorb his powers, which turns out to actually hurt the villain by in some way; through poisoning, or passing on an infection or curse, or by being just so Blessed with Suck that gaining his power is actually a hindrance to the villain.

This strategy can also be used by villains, but is much rarer, mainly because as a result of Bad Powers, Bad People few heroes have abilities that involve eating or assimilating their opponents.

When the result is unexpected rather than planned or is played for laughs, that's Too Spicy for Yog-Sothoth.

Let's Meet the Meat is the trope for when the meal really does want to be eaten, and presumably what this one looks like from the eater's perspective, until they start having trouble digesting it.

For the explosive version, see Feed It a Bomb. For versions where the hero wasn't counting on getting eaten but busts out anyway, see Kill It Through Its Stomach. If Satan or a senior member of the infernal hierarchy is doing the eating, this can lead to a tour of the Bloody Bowels of Hell.

Not to be confused with Schmuck Banquet. Contrast Regret Eating Me.

Examples of being Physically Eaten:

Examples of being Assimilated:

Fista Puff has to fight Dr. Splash, who's a huge, sentient body of water. Fista Puff defeats him by absorbing him through her puffs and draining him into the sewer.

Fista Puff has to fight Dr. Splash, who's a huge, sentient body of water. Fista Puff defeats him by absorbing him through her puffs and draining him into the sewer.