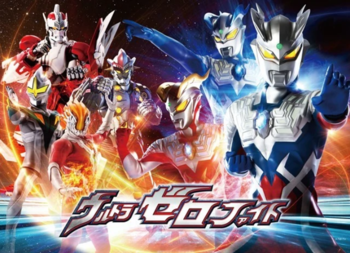 Five to the Power of Zero is Equal to...
Advertisement:

In the series, after the events of Ultraman Saga, Ultraman Zero is training himself in the Monster Graveyard, meeting an old friend of his, a Pigmon. His training is quickly interrupted by Alien Bat Gurashie, brother of the Alien Bat slain by Zero in Ultraman Saga. After a fierce battle against Gurashie and his monster army (unlocking Zero's Strong Corona Zero and Luna Miracle Zero forms, which he inherited from the powers ofUltraman Dyna and Ultraman Cosmos after fusing with them in the movie), from which Zero emerged victorious, the Ultra is further challenged by a legion of alien invaders known as the Darkness Five. With the timely arrival of Zero's comrades, the Ultimate Force Zero, who allied with Zero to help save the galaxy years ago, Ultraman Zero is finally able to complete his training and further his powers to beyond his greatest limits.

The series was re-released on Tsuburaya Production's Official Youtube Channel

in 2019, to promote the 10th Anniversary of Ultraman Zero's debut.