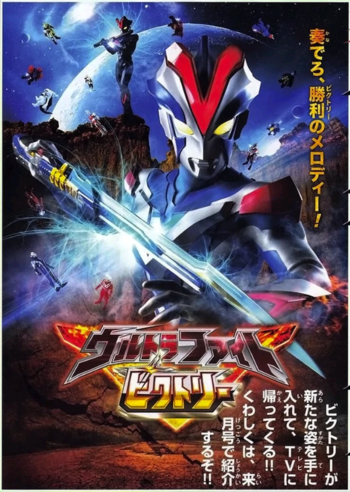 Ultra Fight Victory is the second Ultra Series-based youtube miniseries released by Tsuburaya, after Ultra Zero Fight, directed by Koichi Sakamoto, serving as an extension of the titular Ultra's story after being the deuteragonist of Ultraman Ginga. Also, several scenes from the short series serve as genre throwbacks to older installments of Tsuburaya's Golden Age, especially to Ultraman Ace, Ultraman Story, Ultraman Leo and Andro Melos.

Yapool last seen in Ultraman Ginga S, has returned from his apparent defeat in Ultraman Mebius. And this time the sinister interdimensional demon-lord is scheming to resurrect an even greater evil. In Shou's homeland, the Victorium Kingdom, an attack from the antlion Terrible-monster Aribunta has Victory seemingly pinned down, until the arrival of Ultraman Hikari turns the tide of the battle around. But Aribunta is just one of many Terrible-monsters unleashed by Yapool, and from Hikari, Victory learns the fate of his close friend and brother-in-arms, Ginga, as well as Yapool's latest plans, which he will be destined to stop...

An English dub of the series provided by William Winckler Productions was released in parts on Tsuburaya Productions' official Youtube channel.