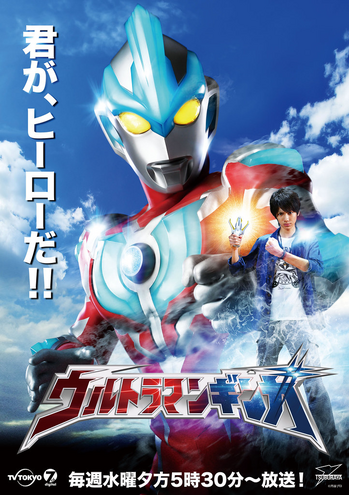 "You are a hero!"
"Through the darkest night, keep on shining, Ginga! Let your light us guide us together once more!"note Hoshizora ni kagayake Ginga! Mou ichido kimi ni au tame ni
— Ginga no Uta, performed by Voyager.
Advertisement:

Ultraman Ginga is a Japanese television series produced by Tsuburaya Productions, and is part of the Ultra Series. The show celebrates the 50th anniversary of the company, and became the first of the "New Generation" Ultraman series.

In a far-off galaxy lies The Land Of Light, which is home to a race of highly-advanced titans known as Ultras. One day, the Land of Light was drawn into an ultimate battle between the forces of good and evil, which became known as the Dark Spark War. The war came to an abrupt and unexpected end when the battlefield was attacked by an unknown force which transformed every participant- monsters, aliens, and Ultras- into miniaturized inanimate figurines called "Spark Dolls", then scattered them across the universe.

Sometime later on Earth, a young man named Hikaru Raidou returns to his hometown after a period of travelling the world, and is reunited with his best friends from high school. While investigating the makeshift Shinto shrine set up in the school (in place of the real shrine which recently burned down), he discovers that its sacred object is an item known as the Ginga Spark. By using the Ginga Spark to "Ultralive" with a Spark Doll, Hikaru can possess its body while restoring the creature to its original form and size, fighting together as one.

When an evil entity begins to orchestrate monster attacks on Hikaru's hometown, Hikaru uses the Ginga Spark and his collection of Spark Dolls to defend his home and friends. Yet he also has one final trump card, for in times of great need Hikaru can call upon the ultimate Spark Doll hidden within the Ginga Spark: Ultraman Ginga, a mysterious Ultra unknown even to The Land of Light.

Ultraman Ginga is a spectacular example of a shoestring-budget hit. At the time, the Ultra Series brand had been struggling for years and Tsuburaya Productions was in a severe financial crisis following a lost legal battle. Supposedly, Ginga was originally budgeted as an Ultra Series "best of" clipshow to celebrate the 50th anniversary of Tsuburaya Productions, until someone was convinced to make the anniversary show a proper Ultraman series. As a result, Ginga features a thrifty cast, copious amounts of monster suit re-use (from past Ultra Series titles), incredible mileage out of a single shooting location (an abandoned school), and using actual toys (the "Spark Dolls" toyline, which existed prior to Ginga) as props and even main characters.

Incredibly, Ginga was a big hit, leading to a sequel series called Ultraman Ginga S. As the success of Ginga had greatly helped Tsuburaya Productions in paying off their debts, Ginga S is closer to the budget and theme of a regular Ultra Series show. It features Hikaru joining an international defense force called the "Ultra Party Guardians", and introduces a Foil and Lancer in Sho: the prince of a forgotten race of underground-dwelling humans, who is granted the power to "Ultralive" into Ultraman Victory and defend his home from intergalactic plunderers.