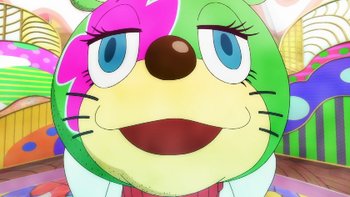 Irabu the Psychiatrist (although it's generally referred to as Trapeze) is a series of short stories about psychology from 2002-2006 by Hideo Okuda and follows the misadventures of the psychiatrist Ichiro Irabu, his nurse Mayumi, and the several patients they treat at Irabu General Hospital. (Before you ask, his father owns the place. Could you imagine this guy running a hospital? ...brr.) Unlike other doctors, though, Irabu's eccentric treatments demand that his patients have to get worse before they get better.

The short stories are compiled into three books: In the Pool, Trapeze, and Mayoral Election. However, only the first of these has been released in English. Ten stories from all three books were adapted into an anime in 2009 (also titled Trapeze) along with an eleventh, original story. Three stories from In the Pool were adapted into a film in 2005, the story "Trapeze" into a live-action made-for-TV movie in 2005, a stage play in 2008 and the first 2 chapters of each book into a (extremely obscure, crappy and supposedly disowned) manga in 2004, too, but you're probably here because of the anime.

And don't you dare go making the assumption that this show was animated anywhere near normally. It makes viewers fear for their own mental health. The show has a surreal visual style with psychedelic colors, trippy imagery, constant art-shifts, and occasional live-action.

open/close all folders
In the Pool
Trapeze
Advertisement:
Mayoral Election

Meanwhile, the anime's eleventh episode is titled "Canary" and is an original scenario about Hideo Tsuda, an emergency room surgeon at Irabu General and the father of Yuta Tsuda from "Cell".