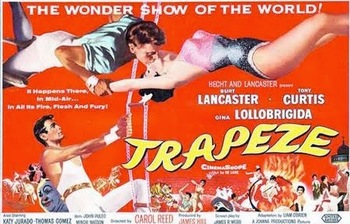 Trapeze is a 1956 film directed by Carol Reed.

Mike Ribble (Burt Lancaster) is a trapeze artist with a circus, namely a "flyer". He is attempting to perform "the triple", namely a triple somersault while flying through the air, a Real Life difficult feat to perform in flying trapeze. He does his three somersaults, and grabs the outstretched arms of his "catcher", Otto. Unfortunately, Mike's hands slip out of Otto's, he falls down to the net below... and he bounces off of the net.

Cut forward an unspecified time. Mike shattered his leg when he hit the ground after bouncing out of the net. He now walks with a serious limp. His career over, he's been reduced to fixing the rigging for the circus acts. He's bitter and he drinks a lot.

Enter Tino Orsini (Tony Curtis) an ambitious young flyer. Tino has heard of Mike doing the triple and wants Mike to teach it to him. Mike is initially reluctant, but he can't deny Tino's obvious talent and soon they are an act, Ribble & Orsini, with Mike as the catcher and Tino as the flyer, working on the triple.

Add to that mix one Lola (Gina Lollobrigida). Lola is an acrobat and also a curvaceous sexpot. Lola, who wants star billing in the circus and the security of a guaranteed contract, worms her way into the Ribble & Orsini act and into Tino's heart. However, while using her feminine wiles to manipulate Tino into making her the start of the act, she starts to fall in love with Mike.

Burt Lancaster actually was a circus acrobat before getting into acting, and did all of his own stunts except for the climactic "triple".