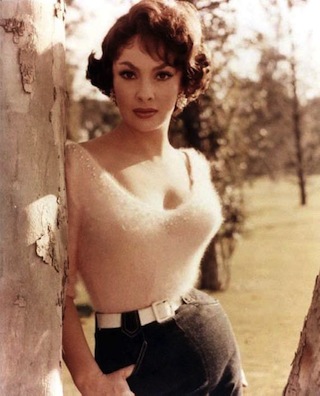 She's been active in films from the late 1940s through the early 1970s. Gina actually earned her fame in Italian cinema (her breakthrough role was in Bread, Love and Dreams in 1953) before beginning to get roles in American films in the late 1950's.

Mostly retired from filmmaking, but has taken up a second career as an artist and a humanitarian activist. She ran (unsuccessfully) for the European Parliament once. She's been overshadowed by Sophia Loren (a Friendly Rival in Real Life) in public notice, but still has a considerable following.

Some journalists and biographers

(most notably Luis Canales in his 1990 book Imperial Gina) mention her interesting habit of referring to herself in the third person.