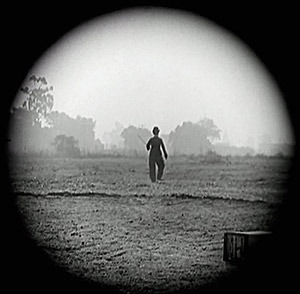 I Must Go. My People Need Me.
Dipper: Ready to head into the unknown?
Mabel: Nope. Let's do it.
— Gravity Falls, "Weirdmageddon Part 3: Take Back the Falls"
Advertisement:

The story ends with The Protagonist(s) traveling away into the distance, while the camera remains in a fixed position. Often symbolizes that the protagonist is leaving behind their old life and about to start a new one. May have a happy mood or a somber one, depending on how much they liked their old life and how willingly they're leaving it.

In any case, it says that this is where they and the audience part company; whatever happens next, the audience will not get to see.

This is often coupled with But Now I Must Go.

A type of Hat-and-Coat Shot, and a Super-Trope to Riding into the Sunset. See also Moving Away Ending, a subtrope that involves a character moving away from somewhere else.

The ending of Ice Age has Manny, Sid and Diego amble away from the camera, content at having returned the human infant to his father.

The ending of Ice Age has Manny, Sid and Diego amble away from the camera, content at having returned the human infant to his father.