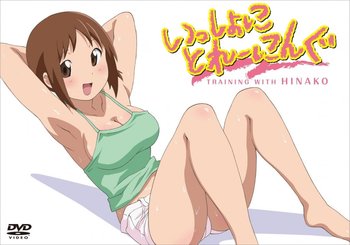 Now comes a 20 minute OVA which fills one of the few niches still not covered by anime: Isshoni Training / Training with Hinako is an animated fitness video released in April 2009. As is the case with most fitness videos, it is less about actually giving exercising instructions but more about giving an excuse to ogle a sparsely clothed, bouncy, sweaty girl.

Despite its very cheap production (countless repeats of the same sequences) it was quite a hit in Japan. All copies of the DVD were sold out immediately at release day.

A sequel, Sleeping With Hinako, was released in February 2010. "Sleeping" alters the formula, and is meant to "simulate" a sleepover with Hinako. It acts as sleep ambiance and an alarm clock. The ambient footage is a repeating loop of Hinako sleeping in sexy poses from various camera angles, giving the viewer something pretty to look at and listen to when falling asleep and waking up.