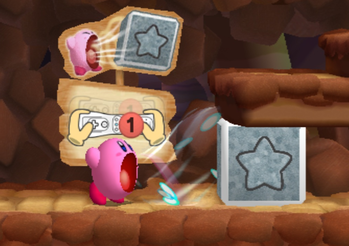 "Why, thank you, conveniently-placed sign of a video game controller and me!"
When a video game offers in-game instructions on how to play through some feature of the game world. The instructions may be advertised on some part of the background, or the player can stop to read them in a manner similar to Story Breadcrumbs.
Advertisement:

This serves to make tutorial levels self-guided and less obtrusive than having NPCs interrupt the gameplay and try to explain the controls while maintaining character. Just don't ask us who the heck is responsible for building and placing those things out there.