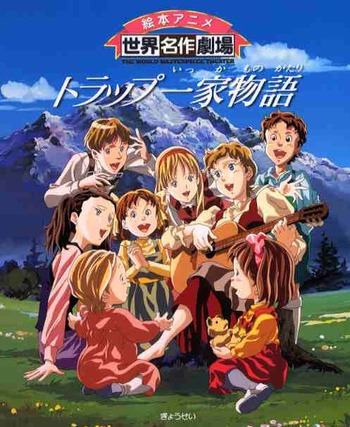 Trapp Family Story is a 1991 anime produced by Nippon Animation and part of World Masterpiece Theater series. It is based on the memoir The Story of the Trapp Family Singers written by Maria Augusta von Trapp. It ran for 40 episodes, airing every Sundays in 1991. The anime shares the premise similar to the book: Maria arrives in Nonnberg Abbey to become a nun. However, she is ordered by Mother Abbess to be the governess of one of Baron von Trapp's children. When Maria arrives in the mansion, she the meets the Baron as well as his seven children who have distrust towards her. Maria learns that the children have lost their mother from sickness few years ago and the Baron plans to engage another woman.

While the anime is generally based on the first section of the book with some mix of the plot from The Sound of Music, the show has several subplots and twists incorporated that made it somewhat different and all of their own. The characters are aged down similar to My Daddy Long Legs, the names of the Trapp children are correct but their birth order is changed and the time period changed from 1920s to 1936.

The anime (in addition to those shared with memoir and movie) provides examples of: