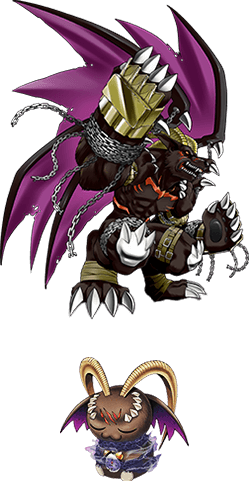 Sure, he's big and scary when he's awake...but don't you just wanna cuddle the sleeping Demon Lord?
"You sure are strange though. Were you this small before?"
— Zeromaru, Digimon V-Tamer 01
Advertisement:

When an immensely powerful character has to have their power sealed for some reason (only to have their true powers unleashed at some point), the artists (usually overly fond of Super-Deformed or "chibi" characters) will represent this by drawing the character in their depowered or "sleep mode" state as a tiny, delicate, and incredibly doll like version of their normal self with the wardrobe to match. This can vary, be it Elegant Gothic Lolita or a more standard Kawaiiko. A normal sized character can be turned into Sleep Mode Size if they have their powers temporarily drained.

Another version is the character just looking like a child version of themselves. Sometimes the cast knows only that version despite the suggestion. The Reveal will show them to be extremely powerful...and probably really good looking.

This can also be done with dragons or other large monsters; they may enter Poké Balls or turn into playing cards, an adorable baby, or a plushy form. Just to name a few examples. The small form may be their normal form and they can only power-up for short periods of time or if given a special stimulus, much the same as a Transformation Sequence.

Super Robots tend to do the reverse with Telescoping Robot. For weapons, see Retractable Weapon.

When demons are brought to Earth, they're super-deformed and have their power reduced.

When demons are brought to Earth, they're super-deformed and have their power reduced.