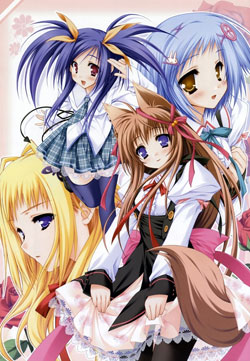 Tayutama -Kiss on my Deity- tells the story of Yuuri Mito, an Ordinary High-School Student with a love of motorbikes and an eccentric father. He's also the descendant of Yachimata, a priest who sealed away spirits called Tayutai many years ago. One day, he rides out with Ameri to find that a relic that houses the Tayutai is going to be destroyed for further city expansion, and as such goes to purify it. Ameri's moped starts up a moment too soon and cracks the rock, freeing all of the Tayutai. Most of them are harmless little spirits, but three of them despise humans and go out into the world. Kikurami, a Tayutai who sealed herself away all those years ago, appears in the form of a young girl who seeks to bridge the gap between humans and Tayutai.

She ends up living at Yuuri's house, ending up married to him after a kiss. Yuuri names her Mashiro, and so the two begin training to reawaken Yuuri's powers and either defeat or bring around the three great Tayutai. Yuuri, Ameri, Yuuri's stepsister Yumina, and Mifuyu, a student from the prestigous Flawless Girls' School, all take part in the story.

Tropes in Tayutama include: