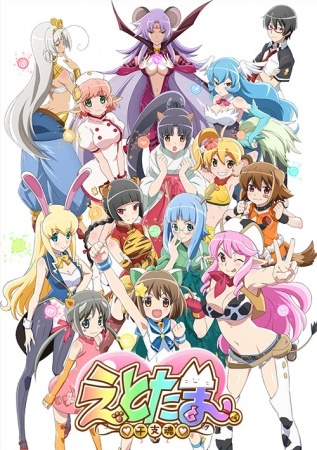 My Chinese zodiac can't be this moe.
Advertisement:

Etotama (Eto-tamashii) is an Anime First production by studio Encourage Films and 3DCG studio Shirogumi, which aired in the Spring 2015 anime season.

One day, Ordinary High-School Student Takeru Amato moved to an extremely cheap apartment...only to find out that there's a hole to the astral world, with his flatmate being the extremely clingy and egotistic cat deity Nya-tan. She failed her promotion to Zodiac being (Eto-musume) 2000 years ago and now seeks to change things.

Unexpectedly for everyone, a new TV series based on franchise was confirmed