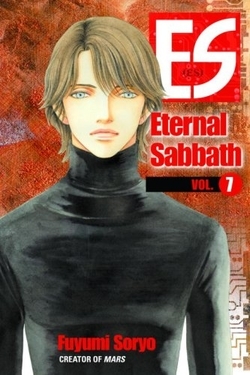 The young man was created in a lab, given a gene called ES - Eternal Sabbath. As a result, he will live to be two hundred years old. He has the power to enter your mind and make you think you've known him your whole life - or forget him, however he wills. He is known as Shuro, though he has taken other names as he needs. Today, he is Ryousuke Akiba.

A series of events brings Shuro to the attention of a brain researcher named Dr. Mine Kujou. She is resistant to his powers, which arouses his interest. However, at the same time, she encounters another resistant - Sakaki, a researcher from the laboratory that created Shuro... the last survivor, as it so happens.

For the lab that created Shuro also created a clone, Izaku. The intention was to dissect Izaku in order to study what exactly makes an ES tick. But when Izaku discovered this plan, he rebelled and killed everyone in the lab whom he could before escaping.

Izaku's still out there. He has no empathy for any human being. If he is not stopped, the consequences could be nightmarish. And Shuro is the only one who can truly stop him.

Now how will they convince Shuro of that?

Eternal Sabbath is an eight-volume manga by Fuyumi Soryo (Mars (1996)).