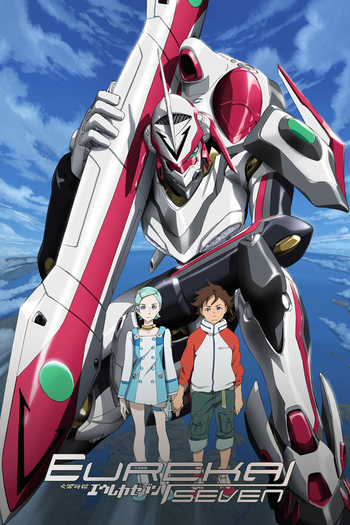 "I can fly!"note From left to right: Eureka and Renton Thurston.
"Don't beg for things. Do it yourself. Or else you won't get anything." note Alternate translation: Don't beg for it, earn it. Then it will be granted to you.
Advertisement:

Eureka Seven (AKA Kōkyōshihen Eureka Sebun or Psalms of Planets Eureka seveN) is a 50-episode sci-fi mecha anime first broadcast in Japan from 2005 to 2006 and produced by acclaimed animation company Studio BONES. It was later picked up in the US for Cartoon Network's Adult Swim block. It has since aired on US television via Toonami.

The story concerns Renton Thurston, a 14-year old boy leading an uneventful life with his grandfather after losing his father (who was involved in narrowly averting a planetwide catastrophe called The Summer of Love) and sister (who set out to look for her father, and who Renton regards as a mother figure). However, his life is changed forever when he meets and falls for Eureka, a mysterious LFO pilot who serves in Gekkostate, an anti-military group under the guise of a counter-cultural commune. The rest of the series focuses on Renton and Eureka's growing relationship and involves general themes of love, acceptance, and the tolls of war. It also involves Sky Surfing mecha, super-intelligent alien lifeforms, evil master plans, more than a few mind screws, and more musical references than one can count.

Perhaps most notable for being a sci-fi action show in which the hero's romance is at the very core of the story; none of the usual tacked-on romantic subplots or sudden end-of-series couplings here. The often-bumpy evolution of Renton and Eureka's relationship (along with a couple of others) forms the backbone of the entire plot.

Two Video Games and two manga series were later made, the games and one series serving as a prequel focusing on other characters (two of which did a split second cameo in the show) and one manga series set in an Alternate Universe. That one is noticeably darker, with severe damage and death among the main cast, actively malevolent Coralians, and a Downer Ending.

A sort of Compilation Movie premiered in 2009, subtitled good night, sleep tight, young lovers.note The Japanese subtitle literally translates as "Pocketful of Rainbows" but they still use the English subtitle "good night, sleep tight, young lovers" within Japan. It's all very confusing. The movie is set in an Alternate Universe from the series, but still features most of the main characters.

This series showed up Super Robot Wars Z, with The Movie appearing in the sequel.

In March 2017, a new film trilogy based on the original series titled Eureka Seven Hi-Evolution was announced. It was released in 2017, 2018, and 2021. Similar to Rebuild of Evangelion, the films re-tell the story of the anime while adding new material, such as showing The Summer of Love onscreen for the first time, the subject of the first film. The second of these films goes into yet another divergent universe and centers around Anemone, who is the heroine of the story, which has an even closer inspiration drawn from Evangelion.

Has nothing to do with Eureka or Eureeka's Castle, or to the interjection "eureka!" In fact, it's pronounced Eu-Recca, not You-Ree-Kah. It kind of sounds like "Erika", but with an accent (especially if you speak English), and at other times comes out as "El-rekka".

While most spoilers are covered, a decent amount of entries will not have spoiler tags. Read at your own risk.

Tropes specifically found in Eureka Seven Good Night Sleep Tight Young Lovers and Eureka Seven Hi-Evolution should go on their pages, not this one.