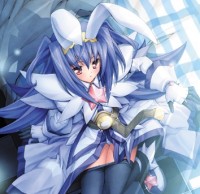 An adaptation of the manga by Kaishaku, Kagihime is the story of Kirihara Aruto, an Ordinary High-School Student with an interest in Alternate L. Takion's Alice story. There are two volumes of Takion's story, and rumors of the existence of a third. One night, after working on his own continuation of the story (Fan Fic, anyone?), he sees the form of a girl flash across the moon... a girl who happens to look exactly like what he imagines Alice should look like. He runs out of the house to chase her, and ends up in a library where the girl he was chasing is locked in combat with another girl who is similarly garbed. Because of this, he becomes involved with several girls called the Seekers of Alice.

The show aired in early 2006 and was released on DVD under the title "Eternal Alice." Compare with Rozen Maiden. Compare with The Mystic Archives of Dantalian, especially the (ahem) key insertion part.