Nothing Exciting Ever Happens Here 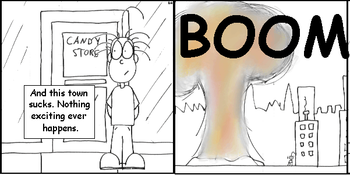 How this usually goes.
"Nothing amazing happens here. Everything is ordinary."
— Naota Nandaba, FLCL
Advertisement:

Aliens landing in UFOs? They're parked in the middle of a deserted cornfield in a rural town where cattle outnumber people. Is there a magical gateway between worlds? It's in the big house in the country where you were preparing to spend the most boring summer of your life. Is there a mysterious gigantic cavern hidden just beneath the Earth's surface, wherein aliens once upon a time created all life on Earth? There's probably a secret door in your friend's dad's basement that leads right to it. New serial killer on the loose? Bodies are piling up in a small town where nothing like this has ever happened before. Plague or Zombie Apocalypse spreading? The epicenter was in that middle-of-nowhere redneck town that your grandpa hails from. Ultimate Showdown of Ultimate Destiny? The county fairgrounds have your front row seats. Looking for the leader of a secret global organization of werewolves? He's enjoying a sub at the mom-and-pop pizza parlor downtown. Emo Teen moving with their divorced mother out of the Big Applesauce into the sleepy suburbs? They'll be hiding Batman in their basement, recruited into a team of superpower-granted teenagers or starting a mission to Save Both Worlds by the end of the first episode.

How can I turn my own boring, mundane neighborhood or small Flyover Country town into a Weirdness Magnet, you ask? Just say the magic words "Nothing Exciting Ever Happens Here," and let Tempting Fate do its work. Be Careful What You Wish For (after all, you don't know what genre you're in) and don't say we didn't warn you!

Everyone's going to assume that wherever you live, nothing exciting has ever happened, and if you live in a city that no one has ever heard of, it's because Nothing Exciting Ever Happened There, so no straight Real Life examples should be mentioned.