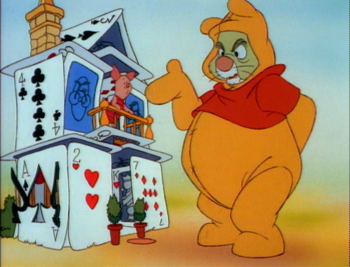 Once Upon a Time, there was a beautiful Damsel in Distress, a handsome prince on an epic quest, his magical sidekick, and a spell they needed to break before the stroke of midnight.

But wait! The damsel's not distressed! The prince is charmless! The homely comic relief sidekick is the Knight in Shining Armor! The Wicked Stepmother is an angel and the 'mistreated stepdaughter' is just a brat! The sweet little girl in the red cloak is a Heroic Comedic Sociopath! And just about everyone's ridiculously Genre Savvy! And all of that is before you get to the ending, which will probably go entirely Off the Rails.

What you have here is an example of a Fractured Fairy Tale, a story with all the basic elements of a classic Fairy Tale, but all of them broken, rearranged and re-presented with modern-day sensibilities and morals. It may also be a parody of fairy tales, a Deconstruction of these tales' settings, morals and sensibilities, or a Perspective Flip (for instance, retelling it from the villain's point of view, often suggesting that the better-known version had an Unreliable Narrator). In all these instances, mundane aspects of the real world can pop up to further subvert tropes related to the genre.

Virtually every Fractured Fairy Tale features (at least) one of perhaps a dozen fairy tales that are considered common knowledge in the culture. This is because they don't work without the audience recognizing the original and so being able to appreciate the divergences. When the Fractured Fairy Tale sticks to, and warps, one specific tale, it is a form of the Twice-Told Tale. Combining stories into a Fairy Tale Free-for-All is also possible, though it, too, sticks mostly to the best known tales — perhaps even more so, since the characters have shorter periods to make their character known.

These are a lot more common than the naive observer would be led to believe. In fact, just about any myth or folktale presented to any older child or adult is bound to contain subversions of some sort, to the point that a completely non-ironic fairy tale itself feels like an irony.

It's somewhat common for these to overlap with Feminist Fantasy, satirizing the original story's gender politics. For instance, a popular twist is to have the brave princess rescue a knight in distress, or object to the idea of the suitor being awarded her hand in marriage.

The Trope Namer comes from a Rocky and Bullwinkle segment of the same title and overall premise.

Compare and contrast Ironic Nursery Tune and Derailed Fairy Tale (when the listener or the teller takes the story Off the Rails). A Sub-Trope of External Retcon, and often a Whole-Plot Reference to an existing fairy tale. A Super-Trope to Dystopian Oz, Beanstalk Parody, Cinderella Plot, and Little Red Fighting Hood. Often overlaps with Dark Parody.