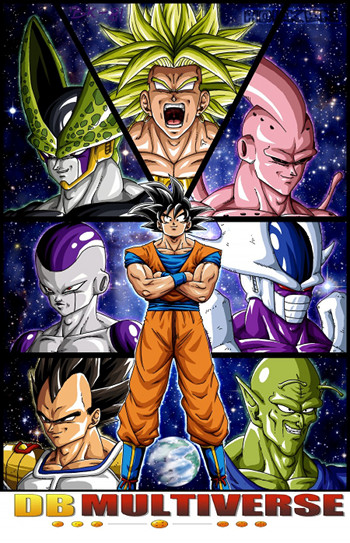 Dragon Ball Multiverse is a Fan Sequel Web Comic set ten years after Dragon Ball Z (ignoring Dragon Ball GT and Dragon Ball Super). Goku, Vegeta and their children are contacted by the Vargas, a race who discovered a way to travel through Alternate Universes and want to hold a tournament reuniting the strongest fighters of The Multiverse. The heroes, always looking for new challengers, naturally accept. The main appeal of the comic is the potential for Ultimate Showdown of Ultimate Destiny and What If? stories.

Originally available in both French and English, but now it can be read in 35 different languages, most up to date. It used to be updated 3 times a week (Wednesday, Friday, and Sunday), but due to the creators recently becoming overwhelmed by the amount of work to do, it's been reduced to twice a week (Wednesday and Sunday). The website can be found here

, but the story starts here

The many universes are numbered from 1 to 20, being called 'Universe 1' and so forth (our heroes come from Universe 18). For the sake of simplicity, it will be sometimes shortened to U[Number] (like "U16") and similar characters will be called U[Number] [Character name] (like "U13 Vegeta")

On May 15, 2021, a new comic was released called Namekseijin Densetsu.