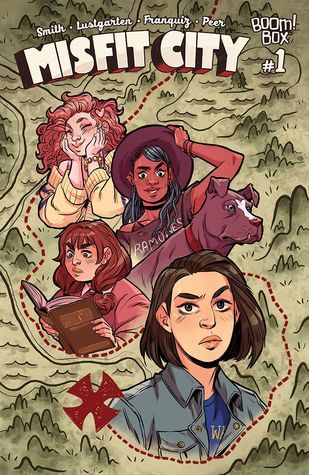 Cannon Cove, Oregon is a small seaside town in the woods. The only real reason to go there is because it was the filming location of an old classic 1980s film, "The Gloomies". Aside from that, it's just another town.

Of course, all that changes for some girls. Macy, who works at the museum that has a few props from the movie. Karma, a hippie-esque girl who believes in spirituality. Dot, a woman of science and reason. And Wilder, a girl with dreams of going to Washington University. Following the death of Captain Adelbert Reed Denby, a chest of his is donated to the museum. Upon opening it, a folded up paper tumbles out, which apparently is a map to the treasure of local legend Black Mary. Finally seeing something interesting that might be happening in their little town, the girls, along with a few close friends like Edwina, a gay friend, and Todd, Macy's brother, decide to go on the hunt.

Of course, it won't be that easy. A couple young relatives of Captain Denby's are rather unhappy about not getting that chest, and the map that leads to the treasure. Undeterred, they start to hunt it down, and deal with anyone who stands in their way.