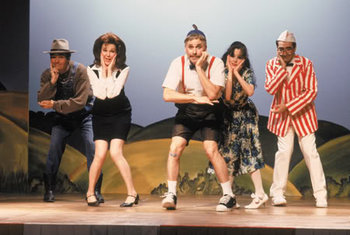 "I'll tell you why I can't put up with you people. Because you're bastard people."
—Corky St. Clair
Advertisement:

Waiting for Guffman is a 1997 Mockumentary co-written and directed by Christopher Guest, who stars along with Catherine O'Hara, Eugene Levy, Fred Willard, Parker Posey, Bob Balaban, and others who would appear in several of the subsequent mockumentaries directed by Guest.

The residents of Blaine, Missouri — the self-proclaimed home of the first UFO landing in the United States (Blaine residents beg to differ with Roswell's claims) and stool capital of the world — are excited about the town's upcoming sesquicentennial celebration, which will have as its centerpiece the original musical production, "Red, White and Blaine." Corky St. Clair (Guest), the musical's writer/composer and former New York theater professional (off off off off Broadway) who currently leads the Blaine Community Players, will helm the production, assisted by high school music teacher Lloyd Miller (Balaban). Corky and Lloyd are excited about their 'talented' cast of locals and the production as a whole, though Corky and Lloyd are themselves as untalented and unaware as their cast. Corky and company are especially anticipating the presence of a representative of the prestigious New York based Oppenheimer Organization, Mort Guffman, in the audience on opening night. In Corky's mind, a favorable review from Guffman means that the production is heading to Broadway. Through all the ups and downs (and more downs) of the pre-production, everyone in Blaine still can't wait for opening night and the arrival of Guffman, upon whom the cast and crew's dreams rest.

The title of the film is a reference to the Samuel Beckett play, Waiting for Godot — similarly, the titular character never appears. As in the other mockumentaries created by Guest, the majority of the dialogue is improvised. Because the film is about the production of a stage musical, it contains several original musical numbers.

Waiting for Guffman contains examples of: